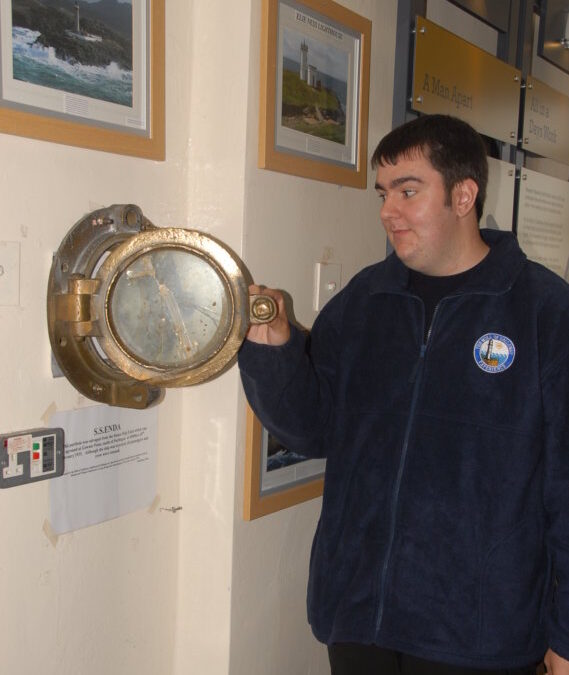 SS Enda Shipwreck at the Mull of Galloway

At 5.00am on the 27th February 1933 the passenger/cargo ship SS Enda ran aground just south of the village of Port Logan on the Mull of Galloway. The ship, on charter to Burns & Laird Line Ltd of Glasgow was a 860 ton iron steam ship. It was en route from Londonderry to Heysham with a cargo of linen goods, cattle and pigs. In the North Chanel she encountered a North Easterly gale of force 9 or 10. Seas were described as exceptionally heavy, and to add to the problem a snow blizzard was also blowing. On board were 23 men, 1 woman and a baby in arms.

The Captain in an effort to find some shelter from the raging easterly gale and blizzard which, due to poor visibility resulted in his running aground on the rugged western coastline of the Mull of Galloway. The crew fired distress rockets and abandoned ship onto the rocky coastline. The first rockets were not seen, but additional rockets were set off which were spotted resulting in all on board being rescued.

The Enda remained ashore for the next few weeks and a Dundee based salvage company succeeded in saving a portion of the cargo, with the exception of the cattle and pigs who had to be humanely slaughtered by a local butcher from Drummore. All attempts to refloat the ship were abandoned when she broke her back during further bad weather in March of that year.

The Porthole returns to the Mull of Galloway

Over the years the wreck has taken a pounding from the waves that crash onto this rocky coast line, and little is now left. However in 1975 retired motor mechanic Alan Parry from Cheshire a member of the St Helens and Widnes underwater Group diving club, accompanied by Don Donald, where undertaking a dive on the shipwreck when they saw a porthole, still attached to what was left of the steel hull. After a struggle the porthole was salvaged and has up until now taken pride of place in Alan’s home.

Earlier this year Alan used Facebook to see if anyone would be interested in having the porthole. Steve Hardy vice chair of the SRCDT contacted him and agreed to take possession so that it could be displayed in the Lighthouse Exhibition. As the porthole is solid brass with 1/4inch plated glass it weighs around 60lbs so arrangements were made for it to be collected from Alan’s home in Northwich, Cheshire.

The porthole now takes pride of place within the Mull of Galloway Lighthouse Exhibition.