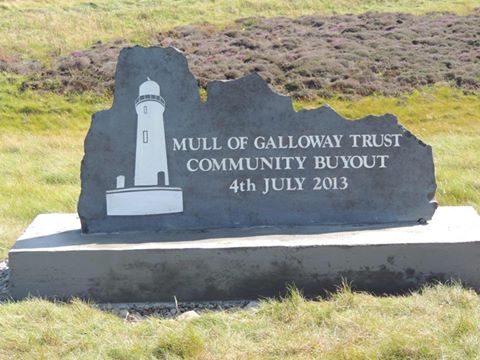 New developments at the Mull of Galloway include a commemorative stone to mark the community buyout, new benches around the reserve and new viewing platform for wheelchair users with a view of the fog horn, cliffs and nesting birds.

There have been additional opening times this year with the lighthouse open daily during the whole of July and August. Visitor numbers have increased for the lighthouse and exhibition this year by 36%.

Various events have been held this year commencing with our Easter event, which included a craft market, Renita Boyle storytelling, RSPB Easter egg hunt and Easter bonnet parade. Other events include whale and dolphin watches, a smugglers weekend and International Lighthouse Heritage Weekend. The interpretation area in the RSPB building has been utilised for presentations and craft markets. Five local schools have visited this year as part of their school curriculum.

During the year we have been working in partnership with Logan Botanic Garden and we now exhibit an interpretation board and leaflets for the garden in the exhibition. From 20th August until 31st October the Mull of Galloway Experience together with Alexander Fraser Photography had an exhibition in the studio within the Discovery Centre at Logan Botanic Garden. This exhibition relocates to Stranraer Museum from 19th December until 27th February 2016.

Our marketing of the Mull of Galloway Experience throughout the year has drawn the attention of national media and we have been visited by Border TV, STV and BBC Radio Scotland and featured in various television and radio programs.

The Mull of Galloway Experience plans to build further on its recent success and developments for 2016 include new interpretation panels which will be located around the reserve, fog horn and lighthouse.

Many more Joint events are planned for the 2016 season and the Mull of Galloway Trust are delighted to announce that they have been granted a licence for weddings to take place at the Mull of Galloway offering wedding parties the opportunity hold their special event within the stunning coastal scenery which forms Scotland’s most Southerly point.